It is estimated that some 50% of hedgrows in the UK have been removed since the early 1950s, primarily to maximise food production in the aftermath of World War II. The main hedgerow components in Wales are blackthorn (Prunus spinosa), hawthorn (Crataegus monogyna) and European gorse (Ulex europaeus), though a wide variety of other trees and shrubs also commonly contribute. Hedgerows play an important connectivity role in the UK countryside, providing links between ever-more fragmented patches of semi-natural habitat. They also provide an important early source of pollen and nectar for pollinators, important breeding and sheltering sites for birds and mammals, and an important source of autumn berries, particularly for migrating winter thrushes. For these reasons, the timing of any hedgerow management is critical. If trimming occurs in early spring or summer it will not only disturb nesting birds, it will also impact on the availability of spring flowers for pollinators and consequently the availability of autumn berries. In the not too distant past, this was considered the optimum time for hedgerow trimming. Currently, the favoured time for thrashing and trimming is in late summer/early autumn, removing the vast majority of fruits before the migrating winter thrushes arrive. This modified state is illustrated and described below. 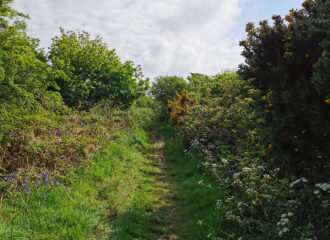 The importance of mature and relatively undisturbed hedgerows in the current Welsh countryside cannot be overstated. As such, the reference state for hedgerows are mature examples that are managed only when absolutely necessary, e.g. for access/practical purposes, and even then managed conservatively in relatively short sections on a long rotation. This will minimise the risk…

END_OF_DOCUMENT_TOKEN_TO_BE_REPLACED 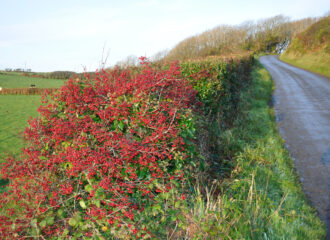 As shown in the image above, it is currently fashionable to thrash hedgerows with mechanical flails and then trim them neat and square in late summer / early autumn. This effectively removes all of the berries from the Welsh landscape before the migrating and wintering thrushes arrive searching for food. This level and frequency of…