Blanket bog forms on deep peat in areas with high levels of precipitation and low evapotranspiration, in Wales, these conditions occur mostly in the uplands of north and west Wales. Blanket bogs in the Welsh mountains lies over undulating as well as in wet hollows and often forms large scale mosaics with dry heath and acid grassland. The habitat is generally species-poor and typically dominated by bog mosses (Sphagnum spp.), ericoids such as Ling (Calluna vulgaris) and cross-leaved heath (Erica tetralix) and cotton grasses (Eriophrum spp.). The largest areas of blanket bog in Wales are in the Berwyn and Elenydd and Eryri mountain ranges, though the habitat can often be fragmented and degraded, particularly in Elenydd. At best, the habitat forms patterning that resembles the hummock and hollow complex of raised mires. However, large areas of blanket bog in Wales show signs of degradation with impoverished areas dominated by grasses. The main causes of degradation in the past have been drainage and burning to create better habitat for grazing, peat cutting for fuel and compost, and afforestation, though climate change also poses a threat if precipitation levels fall and warming occurs. 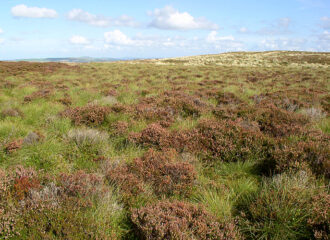 The main threats for blanket bogs in Wales are from burning, draining, overgrazing, global warming and atmospheric depositions. The blanket bog surface seen here appears to be intact and shows fews signs of modification through peat-cutting, drainage, overgrazing or burning. There is also some subtle local doming evident suggesting that peat growth is still happening.

END_OF_DOCUMENT_TOKEN_TO_BE_REPLACED 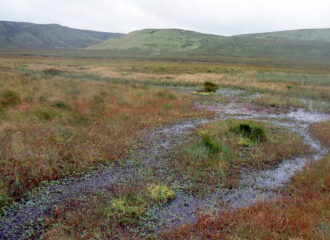 Many areas of blanket bog in Wales have been modified by a long history of burning, peat-cutting and overgrazing, but still support active peat-forming species. When considering the condition of blanket bogs in Wales, particularly like this area on the lower hills and mountains of Elenydd , we must also take the increasingly milder winters,…

END_OF_DOCUMENT_TOKEN_TO_BE_REPLACED 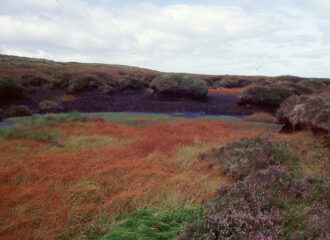 Peat hags are evidence of erosion, either from burning or from water flow eroding downwards into the peat. The exposed area of bare peat associated with peat hags can indicate a problem if the area is extending and actively eroding. However, as seen in this image, areas of bare peat can be quickly colonised and…