Marshy grassland is typically dominated by a mix of purple moor grass (Molinia caerulea) and rushes (Juncus spp.). Under base-rich conditions, the habitat can be of European conservation importance, i.e. protected under Annex I of the EC Habitats Directive. And at locations where the vegetation has an open structure and an abundance of devil’s-bit scabious (Succisa pratensis), it is the preferred habitat of the marsh fritillary (Euphydryas aurinia) butterfly in the UK: a species protected under Annex II of the EC Habitats Directive. The reference state for marshy grassland comprises open and botanically-rich swards, typically grazed by small numbers of cattle. However, most marshy grasslands fail to meet these criteria, having been recently undermanaged, abandoned or, conversely, overgrazed. The sections below provide descriptions of the reference and modified states of marshy grassland. 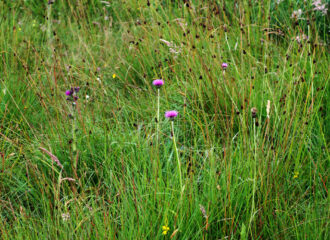 The reference state for rhos pasture would be damp, marshy grassland where purple moor grass (Molinia caerulea) was one of the co-dominant species. The vegetation would have an open structure, and not be too closely grazed nor under-grazed and tussocky, this structure can be achieved through light grazing with large animals (typically between 1-2 livestock…

END_OF_DOCUMENT_TOKEN_TO_BE_REPLACED 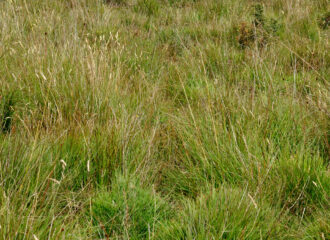 If rhos pastures are under-managed or neglected, purple moor grass (Molinia caerulea) soon achieves dominance. If allowed to continue unchecked, it continues growing to form large tussocks, to the exclusion of most other non-woody plant species. In these situations, willow or birch scrub, and sometimes alder, can encroach and eventually replace the pasture.

END_OF_DOCUMENT_TOKEN_TO_BE_REPLACED 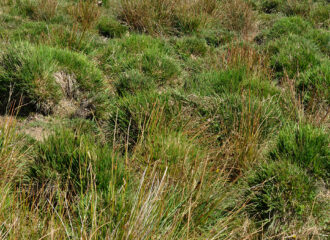 In this instance, the rhos pasture has been neglected, allowing the purple moor grass (Molinia caerulea) to form robust tussocks. Grazing animals have then been put in to open the habitat up. However, the grazing intensity has been too high and any palatable plants have been grazed out, leaving a very species-poor sward of little…