Maritime grassland typically forms a fairly narrow band of habitat, sometimes no more than a few metres wide, between the rocks and cliffs of rocky shorelines and the less exposed grasslands and heaths further inland. The extent of the habitat can vary from year to year, depending on the degree of salt deposition during winter storms, which also limits the species composition to a relatively small number of salt-tolerant species (halophytes). As such, the habitat is invariably species-poor, and can be totally dominated by one or two species, such as red fescue (Festuca rubra), Plantago marittima, Plantago coronopus and Armeria maritima. The structure can vary considerably, however, from a closely cropped sward where sheep and rabbits graze, to a sward dominated by robust cushions of red fescue and little else. The most likely factors determining the structure of the sward are salt deposition, wind exposure, soil depth and grazing management. The three reference states are described below. 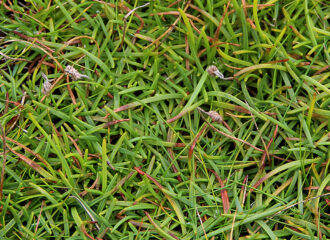 This reference state of maritime grassland is dominated by species of Plantago, sometimes dominated by Plantago maritima and/or Plantago coronopus, and sometimes by a mix of these and Plantago lanceolata. The habitat is invariably species-poor and very short, which is important for the local Chough (Pyrrhocorax pyrrhocorax) populations which favour these short, accessible swards for…

END_OF_DOCUMENT_TOKEN_TO_BE_REPLACED 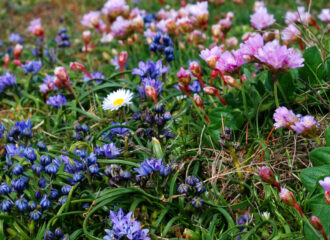 This reference state is a short, open sward primarily dominated by thrift (Armeria maritima). In spring, this habitat can provide spectacular displays of colour around the Welsh coastline, dominated by the pinks and blues of thrift and spring squill (Scilla verna) respectively. As with the Plantago dominated maritime grassland, this habitat is a favoured feeding…

END_OF_DOCUMENT_TOKEN_TO_BE_REPLACED 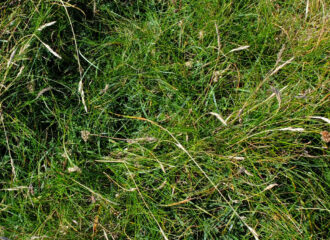 This reference state is similar to states 1 and 2 in being very species-poor and determined primarily by the extent and amount of salt deposition. It differs in having a much more robust structure dominated almost exclusively by large cushions of red fescue (Festuca rubra). The habitat tends to form on deeper soils than the…